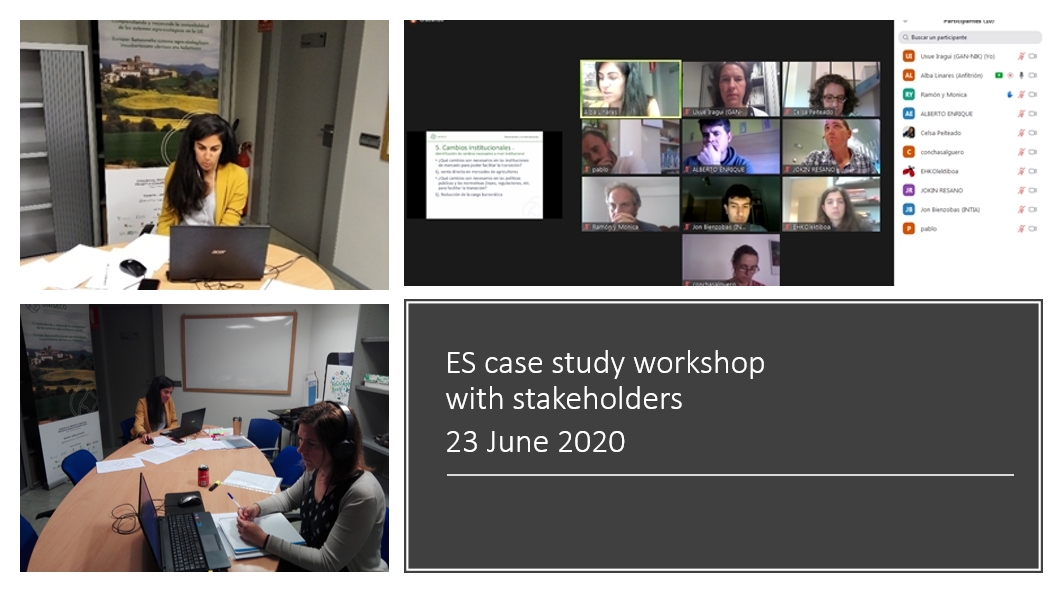 Eight participants, representatives of farmers in transition, farmers’ associations, environmental NGOs, government institutions and the academic sector, participated in the workshop to discuss the most appropriate strategy to implement agro-ecological practices, overcome current obstacles and improve opportunities in the case study of Navarra and the Basque Country.

The co-construction of this transition strategy focused on the following elements: actors involved, type of relationship between actors, necessary institutional changes and political and market incentives that could enhance the transition.

Regarding the actors involved, the participants highlight the importance of two main actors: farmers, as leaders of change, and the public sector or authorities, as facilitators of the transition. Regarding the relationship between actors, the cooperation described by the participants is a bottom-up process, which begins with the strengthening of farmers and then involves the other actors. It was discussed whether actors that follow the conventional farming model, such as large distributors, should be excluded or not. Rather than excluding them, it seems more appropriate to try to convince them and only involve them in negotiations once the agro-ecological critical mass is strengthened. With regard to institutional changes, the most notable is the proposal to avoid duplication of infrastructures and not invest public budget in developing the agro-ecological sector when it should be possible to take advantage of existing infrastructures. In addition, the change that seems most necessary, which could solve many of the barriers, is a shift in the mentality or the western development paradigm, which comes to value more the local and small marketing networks, sustainable practices and the relevance of the farmer’s role in society. Finally, several policy and market incentives were selected as candidates to help address barriers and drivers and promote the implementation of agro-ecological practices in the ES case study.