What are interesting scenarios for future European agriculture to investigate in UNISECO? This question and other issues related to the participatory scenario development process being carried out as part of the territorial modelling in UNISECO were discussed with stakeholders at a workshop in Brussels on 1st March 2019.

Thirteen stakeholders attended the workshop and represented farmer and landowner organisations, the FAO, different departments at the European commission and NGOs.

Limitations with previous scenarios and modelling efforts were first discussed.  Stakeholders highlighted the need to include a wide range of sustainability aspects in the modelling – many previous scenarios include only a limited set of environmental indicators such as land use or greenhouse gas emissions. Especially the need to include biodiversity impacts and social and economic aspects such as rural employment was emphasised. Another challenge that was discussed was the need to make scenarios and models detailed enough to catch differences in farming systems at a local or regional scale. Stakeholders were asked to discuss the type of scenarios relevant to them and identify major uncertainties. There was consensus among stakeholders that although 2050 is an interesting time perspective for investigating major changes, designing intermediate scenarios or steps in modelling that target 2030 is very important in order to align with Sustainable Development Goals and the 2030 Agenda. Major uncertainties looking into the future of European agriculture were identified to be the level of implementation of agroecology, the level of trade of food commodities between countries and across EU-borders, the effect of climate change and biodiversity loss on yields, the level of bioenergy production and the level of segmentation of markets into luxury goods versus bulk production. Especially the issue of trade/localised food systems was discussed a lot. These uncertainties will form the basis of the future scenario development in UNISECO, where we embrace them by implementing a range of ceteris paribus scenarios for the main uncertainties mentioned, together with the innovations developed at farm level, to assess the territorial implications of agro-ecology in Europe and beyond.

In UNISECO, sustainability assessment is carried out at two scales – at the farm level in the case studies being carried out in each country (WP 3) and on the territorial (EU) level (WP 4) – see the figure below. 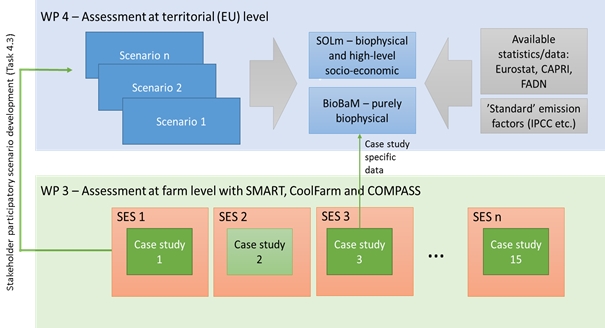 At the farm level, three decision support tools (SMART, CoolFarm and COMPASS) will be used to assess the sustainability of farms. This information will be used to co-construct innovations to improve the sustainability of the farm. At the territorial (EU) level, two biophysical models are used to assess the upscaling of farm level innovations. These models are feed with statistics from existing databases such as Eurostat and FADN complemented with data from the case studies. The scenarios come in at the territorial level building on case study information and are developed in a participatory scenario development process together with stakeholders. The workshop in Brussels held in March 2019 was the first step in this process.