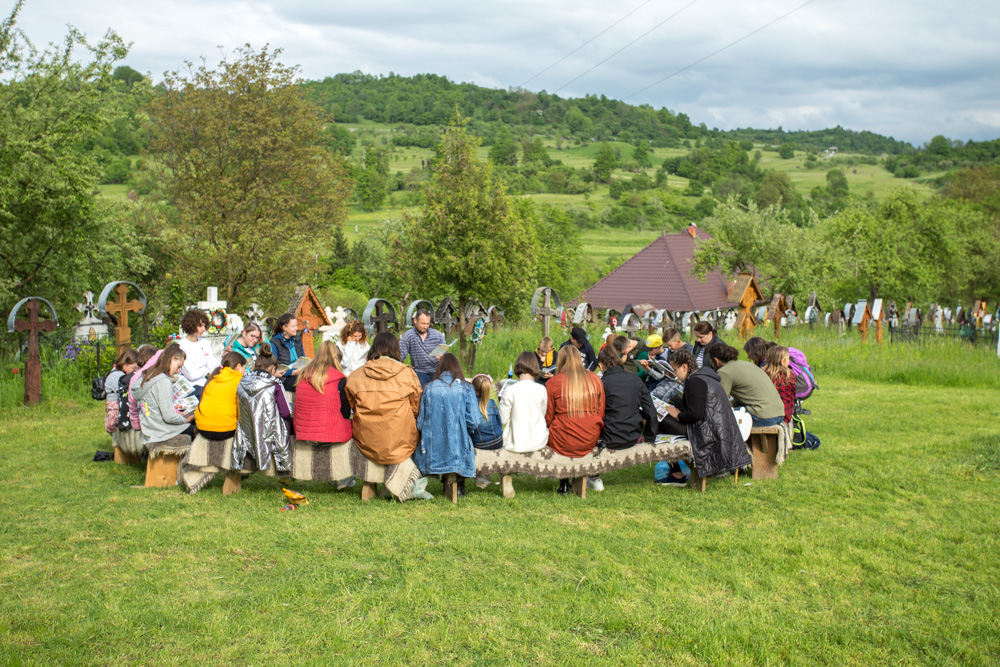 Welcome to this section of the Agroecological Knowledge Hub, a place dedicated to NGOs/civil society organisations, which are an integral part of the (agro-ecological) farming and food system in Europe.

Building the continuum science-policy-practice (or vice-versa) by involving NGOs to co-learn and co-build practical, actionable solutions for advancing agro-ecology. 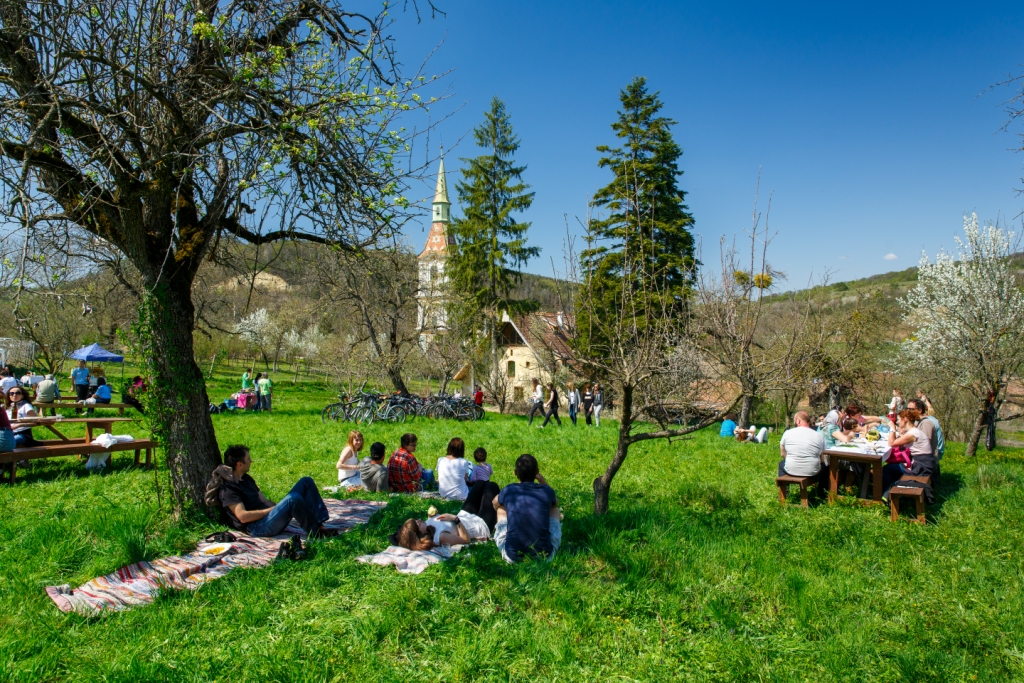 Find out what NGOs are contributing to the process of farming and food systems transformation and what they can do in the immediate future, too 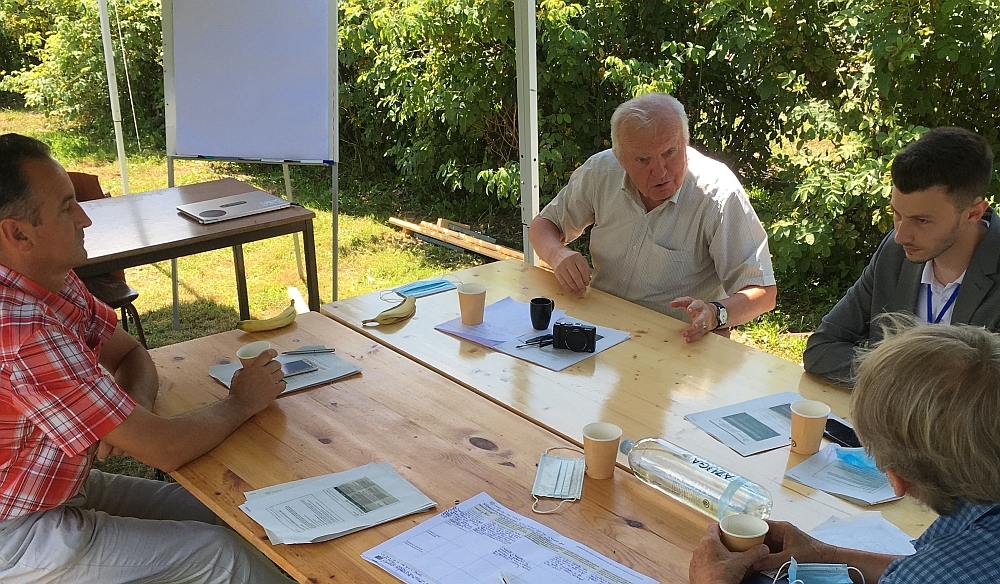 Use the three tools explained below to identify and help implement positive change in your local context.

Role of NGOs in agro-ecological food systems in the EU

The current role of NGOs in agro-ecological food systems

Research has identified the existence of social networks as a common and important denominator in cases where different stakeholders have come together to effectively deal with natural resource problems and dilemmas (Bodin and Crona, 2009).

Actors belonging to NGOs, civil society organizations, and local community representatives are represented in most networks governing the case studies addressed in UNISECO, although with a low frequency. The research uncovered the fact that NGOs' main role is to raise awareness for the key challenges in the case studies among the general public and exert influence through advocacy at various levels.

There are countries in which NGOs are highly active. For instance, in Germany, the case study revolved around intensive agriculture on arable lands, with particular sustainability issues regarding biodiversity loss and water pollution; local branches of environmental NGOs raise awareness about environmental impacts of land management practices.  They finance campaigns and small-scale measures through donations and in some cases they implement specific environmental initiatives together with local village associations devoted to the maintenance of local traditions. They also promote information exchange among farmers and local communities on agro-ecological practices and their benefits.

Similarly, in France, environmental organisations try to encourage actors to take into account environmental problems. The goal is to support farmers' transition and the whole value chain towards agro-ecological practices (e.g. to reduce water pollution by agricultural inputs). NGOs even co-financed policy support on watersheds with water quality problems.

In Romania, where small-scale farming with biodiversity and landscape benefits is facing serious economic challenges, NGOs are ongoing information and knowledge transfer channels between local communities, policy-makers, experts and academia. They have taken upon themselves to inform and empower local communities as part of broader conservation projects through peer-to-peer learning, experience exchanges, by supporting smallholders in gaining access to public funding opportunities, and by investing in infrastructures of local, common relevance. They also play an essential role in advising local communities in matters of common interest related to their field of expertise, organising public consultations and representing the voice of communities in decision-making forums, such as the local councils or in central institutions such as ministries. NGOs are also considered watchdogs in regard to changes in law at the national or local level, and they pass this information to local communities and try to facilitate public participation in political decisions, thus nurturing a civic spirit in locals and more accountability in local authorities. They also act as constant and passionate promoters of the local natural and cultural values, the local produce, farmers and craftsmen to the "outer world", in mass-media, fairs, conferences.

In Scotland, the case study dilemma was about the potential for producing public benefits (i.e. landscape maintenance for tourism and recreation purposes) in farming whilst maintaining economic viability. NGOs can significantly influence the ground level in relation to public goods delivery.

In France, environmental organisations provide recommendations and exchanges with farmers and agricultural advisers to implement agro-ecological practices. The governance network in the agricultural sector is complex and the main controversial matter that was observed concerns the consequences of agro-ecological and environmental practices on agricultural productivity. Frictions appear between NGOs, actors in agricultural and supply chains, with farmers considering it is up to them to decide how to practice farming and not to environmental NGOs or society, including public institutions. There is also a part of the population that finds NGO's positions to be too extreme.

In Hungary, where the project addressed the topic of soil conservation farming, the role of NGOs/civic organisations is related to raising public awareness about the unsustainability of current food systems based on industrialised agriculture. They also convey consumers' interests to stakeholders in food production and try to exert pressure on these actors through public policies. However in practice, these organisations have been found to have little or no weight in terms of influence.

In Italy, the focus was on developing a more diversified cropping system in a highly specialised and market-oriented winegrowing area, in order to increase the resilience of the local farming system. NGOs play an essential role in communicating with local citizens the sustainability challenges that the local farming system faces, especially organic farming. In Latvia, where the economic viability of grass-based conventional and organic dairy farming was the main concern, a few environmental NGOs are active participants in the social network but they seem to exercise moderate influence.

The future role of NGOs in agro-ecological food systems

Our analysis uncovered a range of barriers and drivers hindering or facilitating the implementation of agro-ecological practices in the 15 project countries across Europe. These are shown in the word cloud below and they were grouped into three broad main themes: 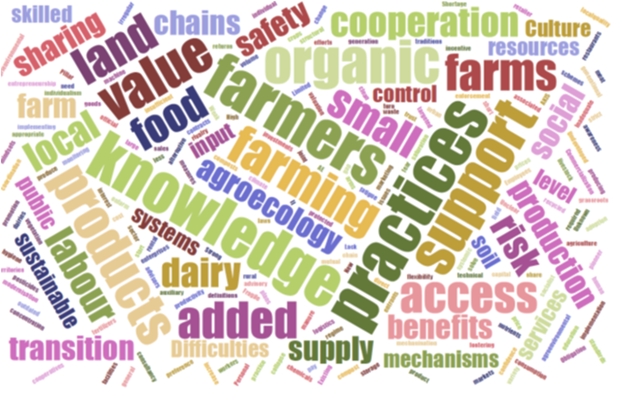 It has to be mentioned, like in other parts of this section, that the 15 case studies are at different stages in the transition to agro-ecology and consist of some cases where the focus of the project work was on initiating transitions, while in others it was on enhancing/supporting the agro-ecological practices that are already in place:

In some of the case studies, the principal issues of sustainability are socio-economic in nature (CZ, ES, LT, LV, RO), while in others they are environmental (CH, DE, FI, FR, HU, IT, SE) or both - socio-economic and environmental (AT, GR, UK).
The local multi-actor stakeholder group in each case study built strategies that address the above mentioned barriers and drivers of the respective agro-ecological transition.

We found that a key aspect for successful agro-ecological transitions are improved knowledge on the benefits of agro-ecological practices and economic opportunities, the importance of education, training and life-long learning, and mature social capital and strengthened collaborative action and collective institutions in agro-ecological value chains. Such processes need to be supported by policy and the public sector addressing issues of economic exploitation, market access and power relations as well as problems of overconsumption and food waste in food chains, with implications for public health, social justice and food security.

NGOs have a part to play in building knowledge and social capital, a key barrier for agro-ecology in Europe

The most commonly identified barrier for agro-ecology is the lack of knowledge of specific agro-ecological practices and their sustainability benefits, and the economic opportunities, and associated uncertainties for creating added value from agro-ecologically produced goods. Such barriers were reported by most of the case studies, and this reflects the knowledge-intensive character of agro-ecological farming. These barriers do relate mainly to a lack of knowledge amongst farmers, but also highlight the need for specialised knowledge for advisors and teachers working in vocational schools. A related weakness is one of limited coordination amongst actors, and even the lack of networks for knowledge sharing. Without peer-to-peer networks to share experiences and knowledge farmers feel unable to implement agro-ecological practices and the lack of institutional support can create a sense of loneliness and farmers fatigue (e.g. Lithuanian and Romanian case studies).

These findings highlight the need for actions to build trust and social capital, which is a long-term process and where NGOs have definitely a role to play.
In Germany, an initiating case study pursuing reduced tillage, crop diversification and intercropping, the knowledge building role of NGOs can continue to support agro-ecology in a fertile context, where the decision-making process of farmers is influenced by the information flow and contractual arrangements with, and rules provided by a range of different actors. These include actors providing advice and promoting capacity building, value chain actors and local community associations representing environmental concerns and interests of specific groups.

In Hungary, an initiating case as well pursuing soil conservation farming, NGOs/civil organisations are needed in a more cooperative environment that could take form of a national platform for soil conservation; this should also include value chain actors, authorities and administration, researchers, consumers and media, and should act as a consultation board in the policy-making sphere and as a medium to strengthen the science-policy-practice nexus. NGOs are also needed to increase consumer awareness of soil as an important natural resource and to help in shortening the supply chain.

In Romania, an enhancing case study pursuing a better nature conservation-economic viability balance in small-scale farming, NGOs and civil initiatives are one of the drivers of a growing demand for local and quality foods. Several initiatives are providing invaluable assistance to farmers applying for EU subsidies or funding. These are creating new contexts for promoting smallholders and local products, and bringing consumers closer to producers. This helps to alleviate the economic constraints of traditional farming. These actors are also helping to bridge the gap in information and participation in public decision-making. All of these roles NGOs are currently playing are important in the future too, where more knowledge-sharing, market access and an improved policy and legislation framework are essential in supporting agro-ecological practices.

In Sweden, an initiating case study pursuing diversification in ruminant farming, consumer demand is, to a large extent, driven by what is made available and what is being marketed. Retailers, the food industry, NGOs, public agencies and the media are important actors for shaping consumer demand, and they could help turn the upward trend in plant-based food into a driver for diversification.

UNISECO offers very interesting findings across a set of case studies in different geographical and cultural settings. Each storymap involves different stakeholders, including NGOs/civic organisations and local communities. Here you will find inspiration or examples of how NGOs/civic organisations and local communities take action in various fields – from carbon neutral milk or sustainable fruit, to water quality or keeping it small in dairy farms. So communities around Europe might find one or a couple most relevant. Explore more via the full collection of storymaps